The Rams simply need depth at the wideout position. Their lack of offense in 2015 made it at times difficult to get into a position to win, and their two picks in the second round of the Draft this year could both possibly be used to shore up a lackluster group of wide receivers. According to Mayock’s 2016 NFL Draft position rankings, the top 5 WR’s eligible this year are:

Torry Holt was the last Rams receiver to reach 1,000 yards, way back in 2007. In fact, they haven’t even had a single player on the roster reach 800 yards receiving since then. So, it might be prudent to target one or two of the above prospects this April.

At 6’2″, 210 lbs., Laquon Treadwell is a big receiver who can also block when called upon to, and will rely more upon his footwork and physical style of play to get open downfield. He has been observed by some scouts as lacking a true “second gear”, and his 40 times at the NFL combine in Indianapolis later this month will be closely watched by media types. 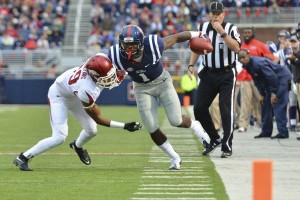 A balanced, strong receiver who will catch anything thrown in his general direction, he has excellent ability to pick up yards after the catch and earned All-America honors during 2015, his junior year at Mississippi. That probably had something to do with his 1,153 yards recieving and 11 TD’s playing in the brutal SEC. He has been compared by some to Dez Bryant because of his athleticism and skill set.