Creep LA: Lore is a joint venture between an annual local Halloween attraction, Creep LA, and Amazon Prime’s Lore, which is a mini-series set to debut on October 13th. 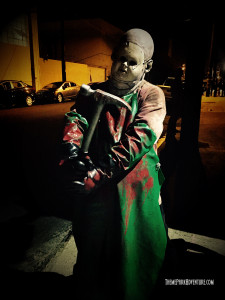 Since 2015, Creep LA has been producing one of the most disturbing, yet well made haunted houses around. After reading the following review from LAist, this particular Guru has decided to plunk down 65 bucks for a ticket:

Though at times labyrinthian, this is no “haunted” maze. Instead of being guided along in a single-file line by impatient staff, guests become a part of a series of vignettes. In a cramped hovel, a woman is accused of being a changeling because she no longer loves the man to whom she’s engaged. She’s had a taste of something better in the woods, she says. Elsewhere, a mother tells us there’s something wrong with her son’s new doll. At least, she gossips, she hasn’t encountered the beast that’s been stalking the forest. Its crimes are so vicious, they couldn’t possibly be the work of an ordinary man.

I don’t want to provide too many spoilers, but I’ll tell you my favorite part. There are 28 actors in the show, and no one guest interacts with all of them. Some seem to exist only to pull you into private scenes, separated from all your friends. At one moment, I was alone in a very small room, passing notes back and forth with a ghost.

Each hour-long walkthrough concludes with a half hour decompression in a lounge, where a cash bar will offer beer, wine and cocktails. Cocktails include the Nightly Medicine, the Wolf of the Woods, and Mercy’s Tonic.

Creep LA runs now through November 12th at The Reef, located at 1933 S Broadway in downtown Los Angeles. The Guru’s personal reviews and highlights of the event will be posted next weekend.