Kenny Washington was the first Black athlete to sign a contract with an NFL team in the postwar era. After leading the nation in total offense while playing at UCLA in 1939, he was surprisingly not a first team All-America selection, nor was he chosen to play in the East-West Shrine Game that season. Some blamed these omissions on racism. Nonetheless he was a part of a great backfield featuring himself, Woody Strode, Jackie Robinson, and Ray Bartlett. 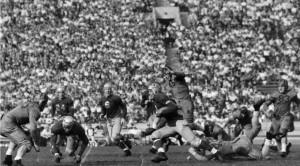 Washington ended up playing for the Hollywood Bears of the Pacific Coast Professional Football League during the 1941 through 1945 season. In 1945, he found himself liberating Jewish prisoners from a concentration camp in Eastern Europe. In 1946, the Cleveland Rams moved to LA, and the coliseum commission stipulated that the Rams sign a black player, as both white and black taxpayers had paid for construction of the facility. Hence, the team signed him on March 21, 1946. According to the archives of the Daily Bruin:

“When team president Dan Reeves moved the Cleveland Rams to Los Angeles, the commissioners of the Los Angeles Coliseum stipulated as part of the agreement that the team be integrated. As a result, Reeves signed Woody Stolle and Kenny Washington, and in the process made history.”

Washington was a staunch Republican and vigorously supported Richard Nixon’s 1950 U.S. Senate campaign. The night before Nixon’s victory in the election, he spent the evening in Washington’s south L.A. home chilling out and playing records. After his playing days concluded, Washington worked as a police officer in the LAPD.