The Rams ditched the yellow accents entirely and adopted a straight blue-and-white color scheme. This lasted for all of nine years. During the first 8 seasons of this blue and white period, the team mainly wore white jerseys both at home and on the road, giving them a predominantly white look throughout the mid to late sixties. 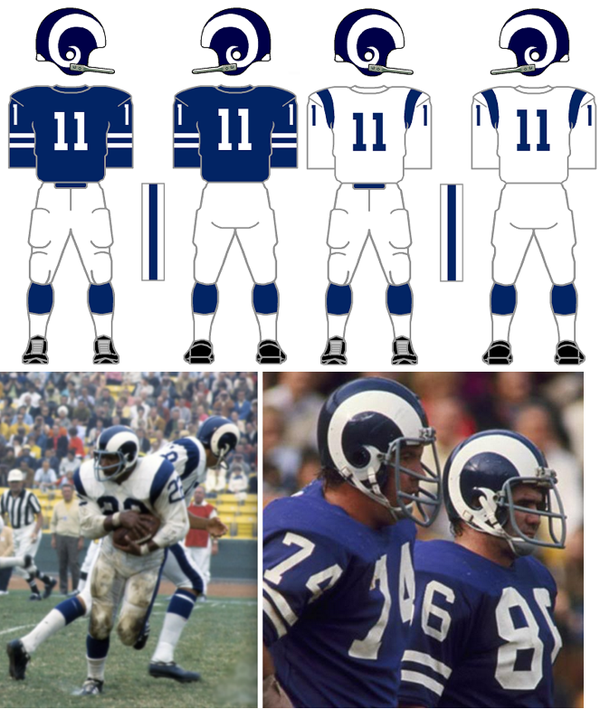 The team replaced the old-school stripes on the sleeves with horns. This season also saw the return of the yellow/gold to the color scheme, which had been missing since the 1964 season. Yellow was featured more prominently this time though, being added to the pants and even the uniform socks too. The team would basically retain this look for the duration of their time in Los Angeles.

The only aspect of the uniform that changed during the Rams’ inaugural season in St. Louis was that the team added a special patch to the front of the Jersey, commemorating the team’s first season playing home games in the Gateway City.

Beginning with the season following the Rams sole Super Bowl win in The Lou, the team began sporting a look that was in many ways a significant departure from previous versions of the team’s duds. The royal blue color of the past was replaced with a darker, “federal” blue. Also, the yellow hue of the uniforms was modified to actual gold color. The shoulder horns were taken off the jerseys, ostensibly because the sleeves were shortened. Side panels were added to the team’s jerseys, mimicking the look pioneered by the Broncos in the late 90’s and still worn by Denver to this day. Solid gold pants, with no striping, a rarity in the NFL, are also sported by the team.

Blue pants with gold striping are added to the team’s wardrobe. This marks the first time the team has worn blue pants, and it only got worse from here:

The ugliest version of the Rams’ uniforms to date must be the blue on blue look first sported by the team during the 1995 season. I like to call this the “hideous blueberry” look.

This basically brings us up to date, although I cannot leave you without a look at the most gorgeous look that the team has sported in recent times, the all mustard “color rush” unis from last season: