In college football, the second-tier FCS schools don’t get as much attention as the cash cow schools in the Power 5 conferences. They don’t produce as much revenue for the NCAA. These smaller schools, however, have produced some outstanding NFL level quarterbacks over the years. One only has to look to the work of Joe Flacco (University of Delaware) and Tony Romo (Eastern Illinois) to see that the path has already been paved from the FCS to success in the NFL. Currently, there is wild speculation circulating about the potential of NDSU quarterback Carson Wentz to be a top 10 draft pick this year.

Emerging from a second straight season during which he lead the Bison to an FCS championship and won the Most Outstanding Player award during the championship game, this speculation is justified. As a high school freshman, he was only 5’8″ and 125 lbs, and didn’t end up starting at quarterback until his senior year. This caused him to be under-recruited, similar to Ben Roethlisberger’s path to college football. 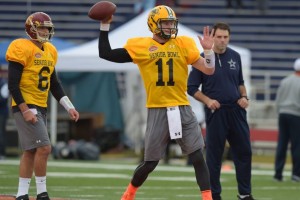 Once at North Dakota State, the Bismark native redshirted, then served as the backup to starter Brock Jensen until the 2014 season. That year, he started all 16 games, threw for 3,111 yards, rushed for 642, and lead the Bison to an FCS title over Illinois State. The following season, he suffered a broken wrist halfway through the year, but came back stronger than ever during the FCS playoffs. Standing at 6’6″, 235 lbs, his 949 rushing yards the past 2 seasons are evidence of his explosive mobility inside and outside the pocket despite his large physical stature.

Described by many as having intelligence and work ethic second to none, he may have an easier time transitioning to the NFL than his FBS counterpart Jared Goff, especially in light of the fact that he worked within a pro-style offense while at North Dakota State, taking plenty of snaps from under center as well as the shotgun. His excellent performance at this year’s Senior Bowl highlighted his ability to set up and launch strikes quickly to unfamiliar targets against elite NFL-ready competition: “I thought it went alright. Obviously, we didn’t score any points, so that’s always a bummer,” Wentz told NFL Network. “… No matter if you’re coming from the SEC or FCS, Division II, Division III, you’ve got to make a jump. The speed of the game is going to come that much faster. Obviously, this is just a step. It’s going to be even faster than this (in the NFL).”

While his accuracy may not be as polished as Cal QB Goff, he absolutely has a stronger arm and stronger lower body. While his detractors can point to the fact that 21 of his 22 starts at NDSU came against second-tier FCS schools, he did throw 18 completions on 28 attempts for 204 yards against his lone FBS opponent, Iowa State. His adjustment to the NFL will be a bellwether for future FCS quarterbacks with similar aspirations.