Among the 3 quarterbacks who stand a fairly good chance of being drafted in the first round of the NFL draft this spring, Jared Goff appears to be the safest bet and the most polished. After throwing for 43 touchdowns to go along with a meager 13 interceptions this past fall at Cal, he has popped up on many teams’ radar screens while tearing up the Pac-12 Conference during an impressive college career.

To his detriment, those 43 passing TD’s and 4,719 passing yards came while working within Cal’s spread offense, which saw him taking almost 100 percent of his snaps from shotgun or pistol this past season. These numbers may be not as apt to translate to the NFL level, where he will be taking much more snaps from under center. With that being said, he certainly isn’t the first quarterback to come from a spread offense while in college, and one only has to look to the solid rookie season turned in by Marcus Mariota this past fall to realize that the adjustment is possible to make in today’s NFL. Every single one of Mariota’s snaps taken at the University of Oregon was from either shotgun or pistol formation.

Quarterbacks guru and Cardinals head coach Bruce Arians has, in the past, stated his very educated opinions on the subject of transitioning from a spread offense: “So many times you’re evaluating a quarterback who has never called a play in a huddle, never used a snap count,” Arians said in an interview with ESPN last spring. “They hold up a card on the sideline, he kicks his foot and throws the ball. That ain’t playing quarterback.” 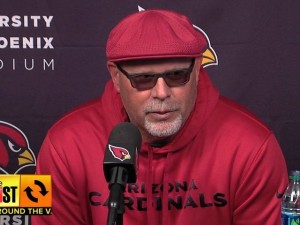 He went on to elaborate: “When you get in the huddle as a rookie and you got 10 veterans and you can’t annunciate and pronounce, and you have to go back and the coach has to tell you a play, that’s frustrating,” Arians said. “Those 10 guys, they’re like, ‘This guy’s really a quarterback?’ So, it’s hard for them.” So, it looks like Goff and his future coaching staff have their work cut out for them already, whichever coaching staff that may be (Cleveland? San Francisco? Los Angeles?).

Goff has shown all of the traits of a successful next-level QB, and left nothing to prove in college. His intelligence, physical stature, mobility and poise should give him as good of an opportunity to succeed as any of the 3 QB’s likely to get drafted in round 1 this year. He has been compared to a young Matt Ryan, has college stats just as good as Aaron Rodgers did for the Golden Bears, and I wouldn’t be surprised to see him become the face of a franchise in the near future.